Cambodia is a beautiful and fascinating country, with many unique cultural conventions, expectations, and traditions. By understanding the Cambodian ‘code of conduct’ and being aware of how your actions may be interpreted by others, you can engage with this culture on a deeper level, be respectful to the local people you meet, and be a great ambassador for your home country too! 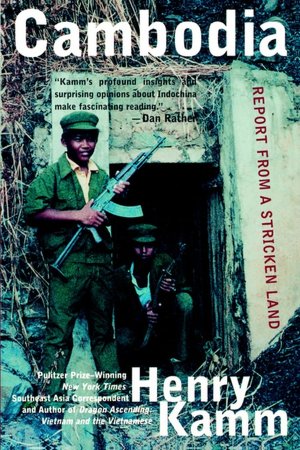 A sobering perspective on Cambodia’s recent, tragic history, Henry Kamm takes an in-depth look at Cambodia’s brutal past, beginning with the overthrow of King Sihanouk in 1970 and covering the turbulent 30 years thereafter, including the tragedies of the Khmer Rouge.

Loung Ung’s powerful account of surviving the Khmer Rouge regime as a child is terrifying and emotionally draining, but a highly recommended read. The author’s unflinching eye for detail creates a vivid tapestry of one of history’s darkest revolutions.
River of Time, Jon Swain (St. Martin’s Press, 1995)

Jon Swain’s book is a wonderful memoir of Indochina, expressing beautifully the powerful, inexplicable hold that Asia has for those who love her. Swain was one of the few Western journalists who remained in Phnom Penh as the city fell to the Khmer Rouge. His descriptions of the siege and its immediate aftermath are haunting.
The End of Poverty, Jeffrey D. Sachs (Penguin Press, 2005)

This book, written by one of the world’s hundred most influential people, Jeffrey Sachs, explores the roots of economic prosperity and the escape from extreme poverty for the world’s poorest citizens. Explaining his own work in Bolivia, Russia, India, China, and Africa, he offers an integrated set of solutions to the economic, political, environmental, and social problems that challenge the world’s poorest countries.
The White Man’s Burden, William Easterly (Penguin Press, 2006)

From one of the world’s best-known development economists comes an excoriating attack on the tragic hubris of the West’s efforts to improve the lot of the developing world. Easterly urges us in the West to face our own history of ineptitude and hold our own aid agencies accountable for the results of their actions. This book presents a contrasting view to the above-mentioned piece by Jeffrey Sachs.
Angkor, George Coedes (Oxford University Press, 1986)

The most recent version will have up-to-date travel information and provides an extensive history of Cambodia, along with a solid guide to the temples of Angkor.

The Killing Fields is an Academy Award winning film based on a true story. New York Times journalist Sydney Schanberg works with local representative Dith Pran to cover some of the tragedy and madness of the civil war in Cambodia. When the Khmer Rouge take Phnom Penh, Schanberg escapes to the US but his friend and colleague must remain behind to face the horrors of the regime.

Born on Cambodian New Year in a Thai refugee camp, Socheata never knew how she got there. After her birth, the family moved to the US where her parents hid the story of surviving the Khmer Rouge genocide. Socheata journeys to Cambodia and discovers the truth about her family.

This film project documents the effects of unexploded ordnance on Cambodian people, both within their homeland and in the US.

A good source with a collection of Cambodia maps

Health Information for Travelers to Cambodia

Network for protection of local children in Cambodia Perhaps you’ve become interested in a tour and decide to search for flights to Cambodia. You go to your favorite travel search engine, type “To: Siem Reap/Phnom Penh” and watch in shock as the engine brings back results that cost thousands of dollars. Don’t despair! Flight ticket searching is like an art form and there are certain tricks to getting to Cambodia that help bring the price down.

When it comes to long distance flights to remote destinations it is best to search for tickets to a nearby air traffic hub. Cambodia is fortunate to be located in the centre of the core Asian hubs that include Bangkok, Taiwan, Seoul, Kuala Lumpur, Singapore and Hong Kong.

Each one of these destinations enjoys a healthy number of both small and large international airlines from all parts of the globe so it is easy to fly in and out regardless of your location. What’s more is that most of these hubs offers affordable low-cost flight options into Phnom Penh and/or Siem Reap, which brings us to the next tip.

Travel search engines do not typically include the low-cost local carriers in their search. You will need to go the airline’s own website to look for deals from your chosen hub destination to Cambodia. The following is the list of low-cost airlines serving such routes:

Bangkok – Siem Reap: Bangkok Airways (this is not a budget airline, but it is the only flight option between Bangkok and Siem Reap); the ultimate budget option for this route, however, is overland by 6-8 hour bus, train, and/or taxi ride

Note: The majority of travelers who join us in Cambodia buy round trip tickets via Bangkok and then either get low cost flights from there to the starting/ending points of the tour or travel into Cambodia overland.

There are overland options in/out of Siem Reap via Bangkok and in/out of Phnom Penh via HCMC for budget conscious travelers or looking to save on carbon footprints. In addition, if your tour is one that starts in Siem Reap and ends in Phnom Penh (like our annual PEPY Ride cycling tour across Cambodia) remember that you can easily travel overland between Phnom Penh and Siem Reap. The bus costs in the range of $5 – $10 between the two cities and takes roughly 6 hours, while a share or private taxi will come to about $55 for the whole car and save you about an hour on the drive. We recommend the bus, but you should note that there are also flights between Phnom Penh and Siem Reap on Bangkok Airways and Angkor Airways, which cost up to $85 each way and only take 35 minutes of air time.

If you live in a large urban centre, contact your local travel agent specializing in the region (like Thai or Singaporean agencies) as they might have access to special deals other agents do not know about. Also, check directly with the airline flying the route to see if they have any current or upcoming sales that might not be reflected on consolidators’ websites.

In the US we recommend Anthony Travel for your flight needs. Keep in mind, using a travel agent has a lot of perks. Agents can help you search through flights, book you changeable options, get you extra upgrades, and handle your unplanned flight changes later if you need them.  As such, they charge a small fee for this service, usually $30-ish. We think it is unfair to have a travel agent do all of the work in searching out the best flights for you, checking alternatives, and putting many hours into your inquiry and then have you go and buy the exact same flight online for $25 less.  We kindly ask that if you call either one of these fabulous travel agents to get a quote and what they come back with gets you interested in the flight enough for you to ask them to spend time to do more research, please value that time and book with them!

Check with the tour coordinator when you book your tour to confirm the start/end locations and to find out what timing makes sense when booking flights or overland transport. Remember, when it comes to Cambodian travel options, your trip coordinator can help book bus tickets, arrange cars, and even book domestic flight travel.  Just ask!

Though you do not need to speak Khmer to participate in our tours, we think it’s a great initiative to try to learn at least the most basic phrases in the language of the country you are visiting. The Cambodians you meet will truly appreciate your effort in getting to know their culture and once you get started, it is a ton of fun as well!

Here are the essentials you will be sure to have the opportunity to practice:

We understand that it can be hard to wrap your head around the phonetics of any new language, especially one so different from one’s own. That is why our friends at World Nomads created this entertaining Khmer audio tutorial that allows you to hear many of the above phrases. Download it to your computer, iPod, or any other mp3 player and you’ll be speaking Khmer in no time!